The Social Recruitment Monitor, the first-ever fact-based and objective online benchmark tool for monitoring and measuring the effectiveness of employers' social media recruiting efforts, has released its 2014 performance findings for major global recruiting employers on Facebook. Let’s take a look back at what happened in 2014 on employers’ popularity, activities and interactions on Facebook.

Facebook brand pages are popular for marketing. Many employers also use them for recruitment. That’s what can be seen from a long overview of global recruiting employers listed in the Social Recruitment Monitor.

Although there are signs of a small decline in popularity of using Facebook as a social networking tool, it still has the largest active user base worldwide. Many HR/recruitment departments acknowledge the importance of connecting, engaging and hiring via a dedicated careers channel or a career tab on a company’s corporate Facebook brand page. 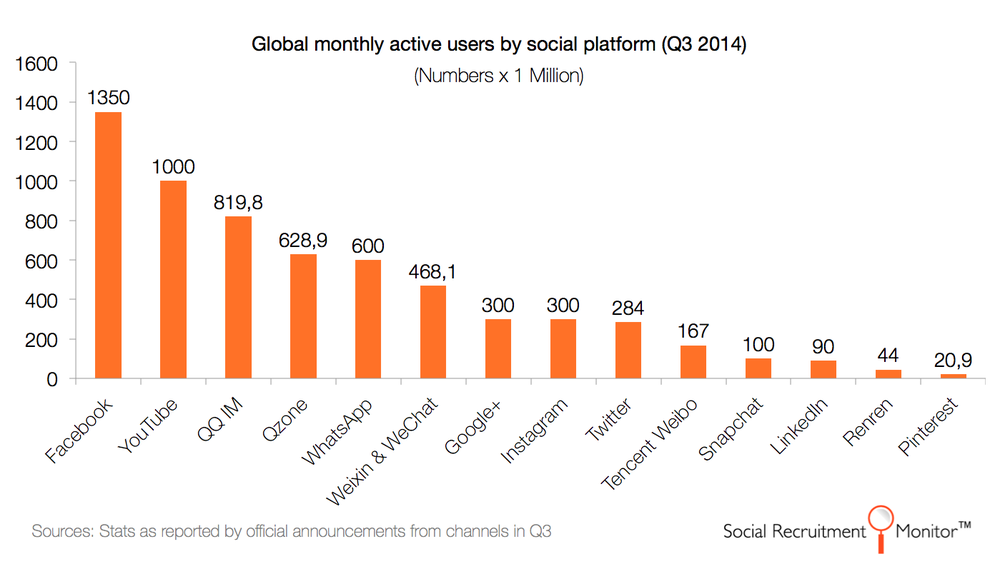 In order to get an indication of which global recruiting employers performed best last year, we carried out an analysis using the average weekly SRM INDEX scores by the Social Recruitment Monitor – a calculated metric that is defined by a series of weighted variables that determine an employer’s popularity, activity and interaction. Based on the average SRM INDEX in 2014, we can see that the Marriott International leads the following top 10 list.

Based on the top 10 performing employers in 2014, we can see an average of 10.3 updates posted on Facebook in 2014 compared to 10.7 in 2013. This very small decrease can be the cause of the composition of the top 10 in 2013, but it could also be sought by the growing interest of employers making use of sponsored updates.

The majority of the updates shared contain visual content in the form of photos. Also in 2014, this was the most popular way to grab ones attention and let them experience their employer branding.

Based on the content analysis on employer Facebook pages, we can see more employers used special designed updates for Facebook. These are usually a translation of their overall corporate identity or EVP.

Posting made by HP on their Global Careers Facebook page (link: http://on.fb.me/15P8pOu) 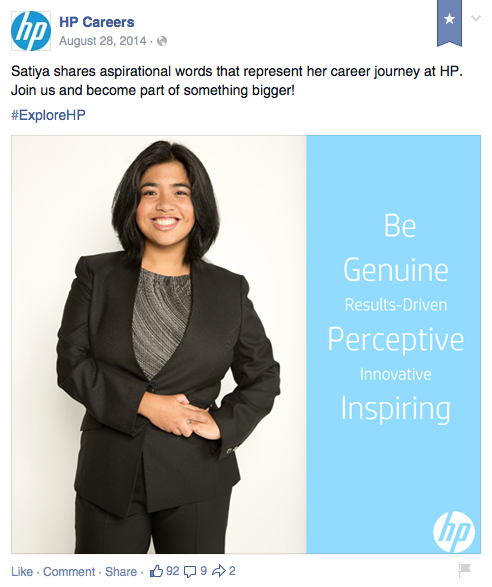 How do all of these updates on the page result in engagement with fans? Based on the top 10 employers with the highest SRM INDEX, we analysed and found that the engagement based on updates posted is an average of 1,240 in 2014 compared to 1,219 in 2013. This growth in average engagement can again be explained from differences between the 2013 list, but can also be sought from the growth in page popularity.

The numbers presented in this article give you an overview of page performances over the year 2014 and compare them to those in 2013. If you’re interested to learn more about the performance rankings week by week of global recruiting employers on other social channels such as Twitter and YouTube, or rankings of different worldwide regions, visit the monitor on www.socialrecruitmentmonitor.com.

We’re looking forward to another year of measuring employers’ activities on social media.